I’ve lost track of how many days into the trip it is (20?), so I’ll just start using the date. Took advantage of the forced trip hiatus to spend some extra time with mom & dad. Walked 5 miles into Winlock and back one morning. Admired dad’s garden and handiwork. Looked at family photos and slides going back to the 1940s. Made some trailer improvements, with dad’s help. Astoria, Centralia, dinner at “Little Crane” with uncle Von and aunt Rose.

And yesterday, after a few nights in a real bed, Glenn flew back on a red-eye to steamy Wilmington, DE (if you hadn’t already guessed, he tolerates the trailer life, but doesn’t crave it like I do). What will I do without him. Who will crank down the stabilizers, cook Mac ‘n cheese, and make disparaging remarks about camping?

So now it’s just me, on the West coast, Saab still in the shop, with the Rockies and 10 days of driving between me and Delaware (if I were to drive straight there). The plan? Head down the coast to SF, then East.

Tonight, I borrowed dad’s truck, and I’m camping in Olympic National park on a bluff overlooking the beach (it’s pretty fabulous). “South Beach” (just south of Kalaloch) is a primitive campground, for $10/night.

The ocean is louder than you’d think, and it drowns out any noise from camping neighbors and generators (including my own). Flush toilets are the only amenities. The nearest potable water us 2 miles away, from a spigot on the side if the ranger station.

I’ve been watching thousands if migrating birds scoot just over the waves, 20 birds deep, in an organized caravan north. All afternoon as the tide inches closer and closer to shore.

I’m a few steps from the beach, which is buffered from the shore by rocks and ancient giant driftwood trees, some hundreds of feet long and as wide as a small house. A few brave teens are swimming in the rough surf (the cold, cold NW surf). 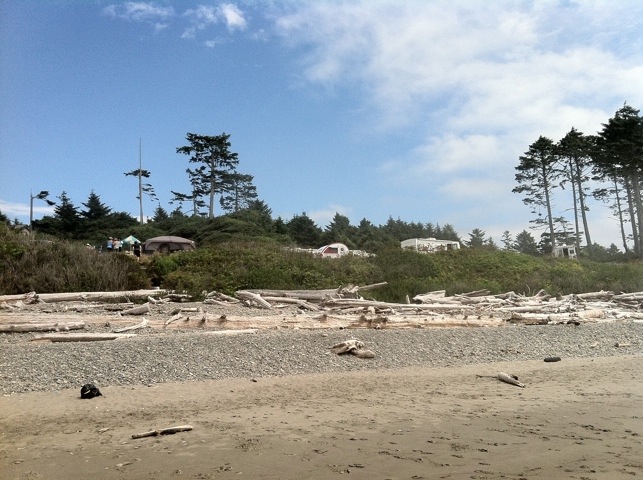