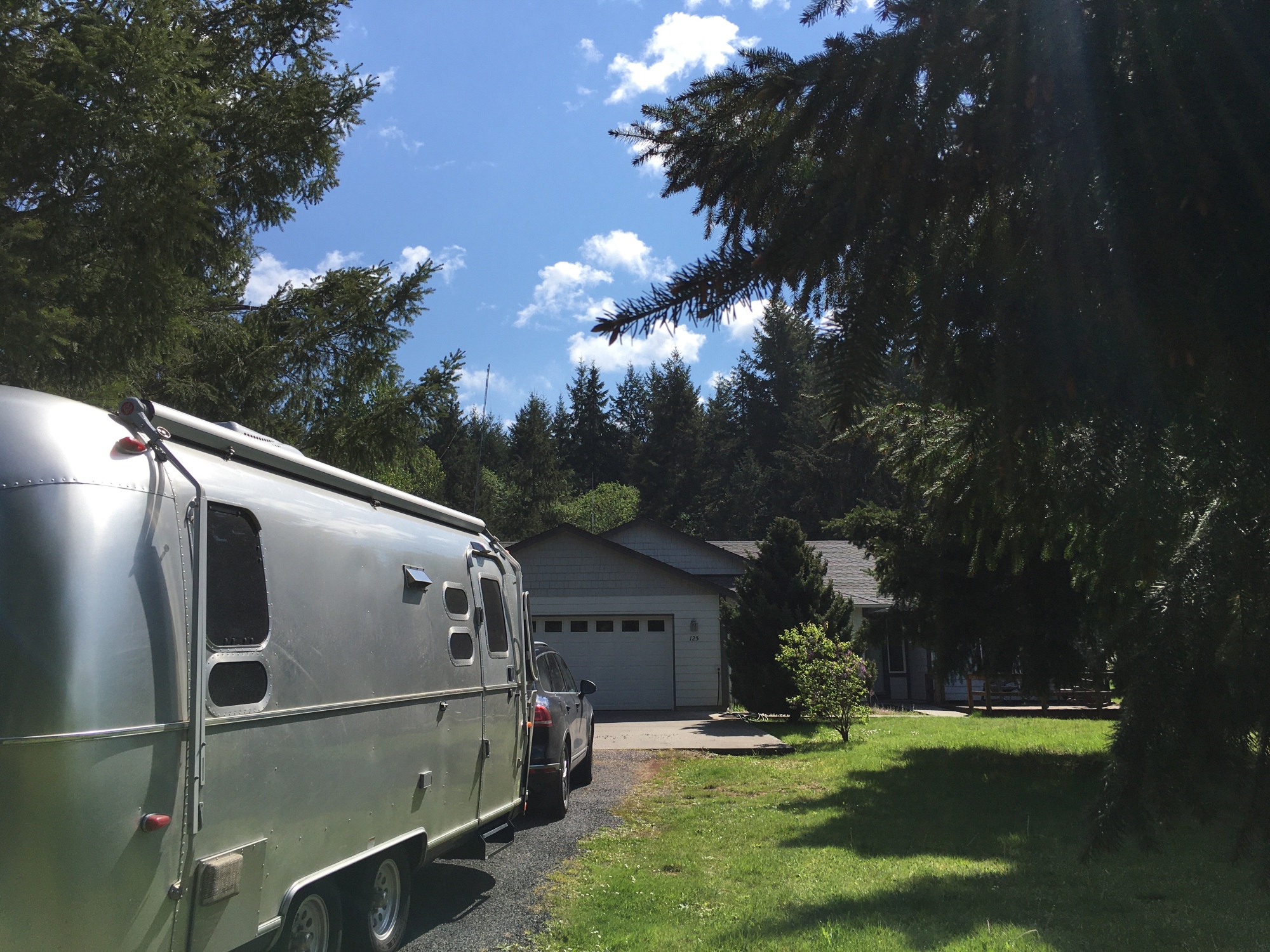 Having an Airstream during the COVID-19 crisis makes it possible to make the best of a bad situation. I’m sure I’m not the only owner to figure out that we have the perfect social-distancing tool in our driveway.

On March 12th, the first of my concerts was cancelled. Within three next few days, my entire schedule was wiped clean thru September (at the least).

So, before the stay-at-home order in Delaware took effect, I spent a few nights at Delaware Seashore. This was the weekend the beaches were shut down due to larger gatherings in Rehoboth Beach.

By late April, my father had been in a nursing home in Washington state for nearly three months, recovering from a broken hip. His release date was looming, and my mom asked me to come out to help. A flight would have meant 2 weeks of quarantine before I could see them.

But… if I drove out with the Airstream, I could eat, sleep, and shower (etc) without seeing a soul. Just ~8-10 diesel fill-ups at self-service pumps. Would I find campgrounds open? Would I be stopped at state borders (as Delaware had been doing)? The only way to find out was to try.

I’m no stranger to long drives (I drove to Alaska with the Airstream in 2018), so my goal was to get out West in five days. I drive across country almost every summer, and hadn’t ever done it in less that 8-10 days.

I left May 1st from Wilmington, DE and made it to Indianapolis. Their KOA was open, but all facilities within were closed (bathrooms and all other amenities). En route, PA turnpike rest areas were closed, but I could pull in for a break or meal. Mostly just me and the long-haul truckers.

On day two, I made it to Nebraska – 765 miles that day. COVID-19? What COVID-19? The KOA’s playground was open. No masks worn at the check-in desk and pizza station. In fact, I didn’t see many masks at all. Listening to local FM radio stations, folks seemed to think all precautions were overdone.

By day three, I camped in Western Wyoming (another 750 miles) where the KOA’s office was closed to visitors. We were instructed to press a button on a call-box outside and someone would come to us with a map with our site marked. I appreciated the caution. And a state with only 7 COVID-19 deaths. They must be doing something right.

Leaving at 5 am, somehow I thought I might make the remaining 1,000 miles in one day. After another 750, I stopped in Pendleton, Oregon, getting the last free spot at their KOA. Self check-in at an outdoor desk. And I think the restrooms were closed.

I had never taken this route West. Normally, I go via I-70 and Denver, Grand Junction, etc. Fighting the mountain passes. But this route (I-80 to Salt Lake City, then I-84) was much more gradual. No really steep grades, other than descending into Pendleton.

Oregon and Washington are not messing around with COVID-19. Leaving the next morning, taking I-84 along the Columbia River, all state parks, and many rest areas, were marked closed. Even the exits were blocked in some cases. I saw many more wearing masks. Heading to I-5 north, this route also avoided the worst of Portland, OR’s narrow lanes, bridges, and merges.

This visit was a surprise to my parents. So, I called mom from the end of the block. She picked up. We chit-chatted, then I pulled up, got out and knocked on the front door while she was talking with me. She got up to answer the door, looked thru the window next to the door and saw me talking to her. She asked me what flight I took. This one:

So, four and a half days and 3,000 miles later, here I am. Camped in my parents’ driveway halfway between Portland and Seattle.
Airstream to the rescue.

PS: All other local campgrounds seem to be closed for the foreseeable future – at least my usual spots (Mt Rainier, Olympic National Park, and all WA/OR state parks).

5 thoughts on “Airstream to the Rescue”