Left the Motel 6 in Gold Beach early (thank you, Mr. and Mrs. Retired Harley-D for the early-morning motorcycle warm-up). Foggy ride down the coast.

Why is it that white and gray cars never put their headlights on in fog? Just sayin’.

Since I couldn’t see much of the coast, I just sped on down, and stopped at “Trees of Mystery” in northern California. Paul Bunyan was being very sassy with the passers-by. This is the first time I realized that his hand and head both move. And is he wearing a black shirt (under his red flannel), or does he have a really hairy chest? Just sayin’.

But since it was still foggy, I decided to save my visit to Trees of Mystery for a sunnier day.

Just south of Klamath, I saw dozens of folks peering over the side of the bridge over the Klamath River. Thinking it might be a bear feeding at the edge of the river, I pulled over, and walked across the narrow ledge on the bridge to see what was going on. A 45-foot gray whale was slowly circling under the bridge.

Turns out, she’s been there for 5 weeks. At first, she was there with her calf, but it was coaxed back out to sea when it was weaned. They’re trying to do the same for mom. In this shot, you can see just how big she is (as compared to the police boat). 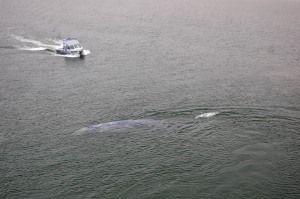 There’s been quite a bit of press about the trapped whale.

Onward to the Avenue of the Giants. It’s a shame I can’t post video, because I got some great shots (with the camera mounted to the windshield) of the drive. I also took some digital stills:

Here’s the whole album on Phanfare.

I’m spending the night in a western-themed motel in Willits, since all the hotels I could find on the coast were $120 minimum.

The camping, however, was ABUNDANT. I passed LOTS of camping. Lots…. of….. camping.